ECONOMISTS FORECASTS WERE FOR 1% fall in Jan 2011.

So how would these numbers translate over a 12 month period? .....

It would be too simplistic  just to take a number & multiply it by 12 month, Jan 2011 could have been a one off or perhaps it was the "FLOODS" or "STORMS"

{ Nov 2010 it was the Grand Final Replay to Blame ??? You have to laugh!!}
Lets be more conservative & say it is only half as bad as the January 2011 numbers would indicate??? ... Lets use half the fall as a conservative benchmark to work with?

Remember this is CONSERVATIVE  taking into account only 50% of ACTUAL Jan 2011 trend!!

So what would this do for property prices? ....

You would have to believe in the tooth fairy if you think somehow we are going to have a
"SOFT LANDING" or prices will "PLATEAU" for 2-3 years.

Property Speculators (They like to think they are investors) will do what they did in the USA dump property & put their money in safer areas.

True investors are not fools. They know what is ahead.

Property Speculators need you to catch a Falling Knife.

Just don't play the role of the "GREATER FOOL" they will be relying on to offload their overvalued properties onto!!

If you agree & think that our markets are crazy or innocent people are going to suffer.
Do something circulate a link to this site & look at some of the other posts or topics I have put up.
Spread the word on Facebook / Twitter or Just discuss around the Water cooler at work.
The better people are informed the sooner we have a sensible property market for our friend & families!! 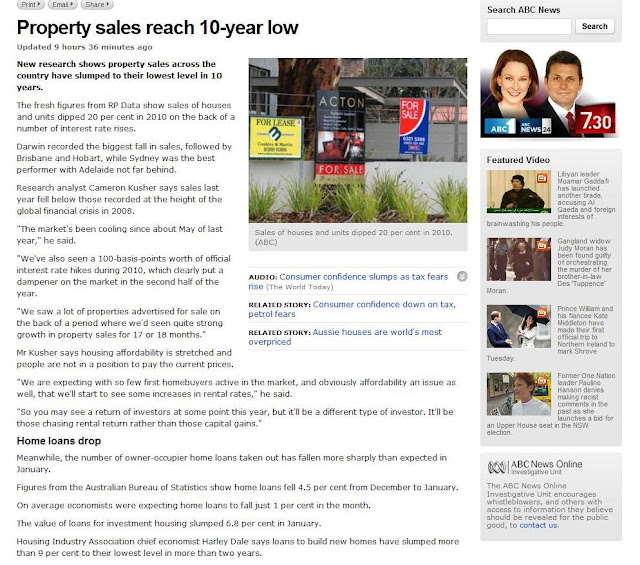 Posted by Not The Greater Fool at 6:12 AM