Never Believe a Thing A Realtor Tells you!!

Never Believe a Thing A Realtor Tells you!! ...
{ Thanks to Tasmanian Real Estate Trouble for Highlighting the subject: ttp://tasmanianrealestatetrouble.blogspot.com/2011/03/heard-it-before.html}
Remember a Realtor has a vested interest in convincing you that everything is OK & now is the perfect time to buy. Because if they don't they Starve!! Just think about this or keep it in the back of your mind when you read stories from Banks / REIWA / RP DATA etc they all form part of what I call "PROPERTY INC" ......

The biggest players in "PROPERTY INC" are Newspapers & property Websites .....

In 2006 Sales in the American Real Estate Markets had slowed down & were STAGNATING.

The National Association of Realtors (They are the same as our REIWA or REIA) decided it was time for action. The Mainline Press were no longer reporting the Property Myth as the would like it to be reported. Facts were drowning out the RHETORIC put out by the NAR so they decided to pay millions to put out the MYTH that now was the perfect time to buy property? Really?

In 2006 USA  property was falling & 5 years later in 2011...  80% of commentators were expecting US property prices to fall a further 10-15% .... but this is the PAID ADVERTISING by the NAR  placed in all the major US Papers. ... Why pay? ... Because Newspapers could no longer credibly report the RHETORIC the NAR wanted them to report so the had to resort to PAID ADVERTS?? 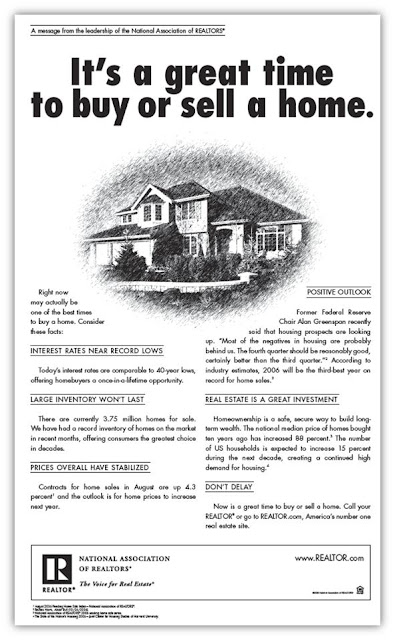 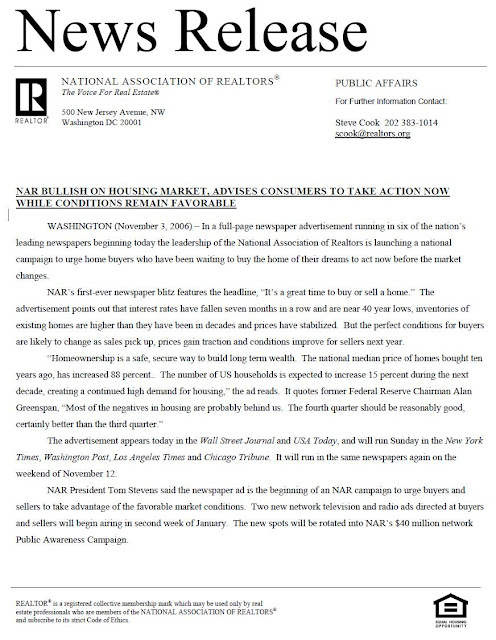 "If you don't tell your story, someone else will," Joe Williams, co-founder of Keller Williams said recently about the media's disinclination to quote real estate brokers as sources for the myriad stories written recently about the so-called housing bubble. Imagine the frustration, ignored by journalists and unable to peddle nonsense to the gullible.

Instead they turn to anyone but people who buy and sell homes for a living -- stock analysts, economists, media pundits, authors, and so on. The effect on buyers has been paralyzing. Many brokers say buyers are concerned with more than rising home prices and interest rates -- they're scared of being the next greater fool. The media turns away from the vested interests to cover the story, balance emerges and the buyers, given a taste of actual analysis and break from relentless spruiking, begin to baulk.

With enormously improved conditions -- interest rates comparable to 40-year-lows and rising inventories that provide greater selection, pending sales are already beginning to rise. Even the former Federal Reserve chairman, Alan Greenspan said he thought the "worst of this may well be over." This could cause many buyers to miss a golden opportunity -- home prices and sales expected to rise again in the spring. Of course things can only get better in real estate land and falling knives don't cause cuts.

Conditions are also improving for sellers. With the number of households expected to increase 15 percent nationwide in the next 10 years, demand will continue. In addition, 2006 has hardly been a failure for housing -- so far, it stands as the third-best year on record. Don't forget the ever-present demand.

Now the NAR is doing something about the negative hype -- running full-page newspaper advertisements in six of the nation's leading newspapers beginning yesterday. The ads are designed to urge home buyers who have been waiting to buy the home of their dreams to act now before the market changes. Not coincidentally, the newspapers chosen -- Wall Street Journal, USA Today, New York Times, Washington Post, Los Angeles Times and Chicago Tribune, are among those most guilty of hyping the housing bubble to the point of scaring buyers to death. The rent-a-quotes became so unreliable, so on the nose, they had to buy their own advertising to con the suckers.

NAR's first-ever newspaper blitz features the headline, "It's a great time to buy or sell a home." The advertisement points out that interest rates have fallen seven months in a row and are near 40 year lows, inventories of existing homes are higher than they have been in decades and prices have stabilized. But the perfect conditions for buyers are likely to change as sales pick up, prices gain traction and conditions improve for sellers next year. Yep, sales are always likely to pick up, these conditions won't last because buyers will come to their senses (or we'll get our manipulative hooks into them) get used to hearing that one.

"Homeownership is a safe, secure way to build long term wealth. The national median price of homes bought ten years ago, has increased 88 percent," points out the NAR. With prices having risen 50 percent over the last five years, including a longer timeline circumvents criticism that the housing market traditionally only barely beats inflation by a point or two. It's done that and more in the last five years, but keep in mind, that previous to the boom the nation was recovering from a housing slump. Actually, home-ownership proved to be an assured wealth destruction tool with prices down over 50% in some markets since this campaign.

In addition to the newspaper ads, the NAR is blitzing network television and radio with ads directed at buyers and sellers. These begin airing in the second week of January -- the start of the spring selling season in the warmer parts of the country. Pity the fool who fell for this con job.

"The market is much better than you might hear or read," says Tom Stevens, NAR's president. "Consumers should take advantage of this perfect alignment of low rates and extraordinary inventory before market conditions change," Over 4 years later and time is still on the side of the buyer.

And NAR's 1.3 million members and state and local Realtor associations are being encouraged to adopt the message in their own advertising and communications to consumers, beginning with this news:

The time to buy or sell is now. I bet those sellers were damn happy.
Posted by Not The Greater Fool at 6:06 AM