The great Australian dream for many individuals and families is to purchase their very own piece of Australia.

As our nation grew and prospered through the second half of the 20th century, this dream became a reality for many young families.

Land was cheap, housing was cheap and most of us could afford to buy our very own home.

Home ownership has been supported more recently by ongoing government initiatives such as the First Home Owner Grant and tax concessions available to home owners.


However, in the last decade, buying your own little piece of Australia has become a lot more expensive.

Just 10 years ago, more than 50 per cent of all suburbs in our five major capital cities were affordable but today only four percent are.

Not a single inner city suburb is affordable today.

Something changed last decade. House prices, not only in Australia, but globally, soared and put the great Australian dream in doubt. Rising prices are seen as a boon for those who already have their own home, but a nightmare for those attempting to get into the market.

Typically, the “haves” purchased their home many years ago when prices were more favourable. They have since experienced windfall gains through the growth in the price of their properties.The “have-nots” are typically renters, the young (often First Home Buyers), lone persons and single parents.

A decent shelter is a basic necessity for us all and owning our own home the life goal for many. While some prefer the flexibility that renting can offer, the stability of tenure offered by home ownership and the sense of place obtained through owning your own home can be hard to beat.

With house prices outstripping income growth over the past decade, owning a home has become less attainable. 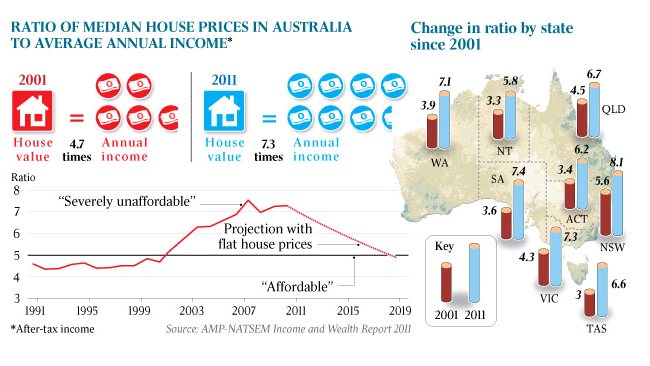 So, what’s affordable and what’s not?
A standard rule of thumb for housing affordability is that a ratio of housing costs to income beyond 30 per cent is unaffordable.

Housing stress in Australia
The previous section dealt with housing affordability, in particular, the financial ability of the typical household to purchase a median priced home in Australia. It also demonstrated a serious decline in affordability in Australia over the past two decades. In this section, we take a closer look at housing stress in Australia - the proportion of income that a household spends on housing costs, including mortgage repayments, rent and rates. Housing stress, especially for mortgages, responds slowly to changes in affordability since most households purchased a home many years ago or indeed own their own house outright. Notable exceptions to this group are First Home Buyers.


How is housing stress measured?
.
Most frequently, housing stress is based on the ratio of individual housing costs to income. Typically, if a household is paying more than 30 per cent of their income on housing they are considered to be in stress. In this report we consider three basic forms:

1. The basic “30 only” rule where a household who pays more than 30 per cent of their after-tax income on housing costs is deemed to be in stress

3. The “50 rule” are those in extreme housing stress who pay more than half their income in housing costs

The 30 only rule is often criticised for including rich households who by choice spend a large fraction of income on housing and the 30/40 rule overcomes this problem by restricting “stress” to only those households in the bottom 40 per cent of the income distribution. Both measures have their place.

The 30 only rule includes all Australian households and so better captures “middle Australia”, while the 30/40 rule is better placed to consider the implications for the less advantaged in society. The 50 rule is a simple measure of households paying a seriously large amount of money on housing and potentially at greater risk of default, especially should their economic circumstances change or interest rates increase.


Who is experiencing housing stress?
Naturally, housing stress is most strongly felt by those buying a home (mortgagor) or those renting. Both tenure types have a high level of stress of around 30 per cent using the 30 only rule. However, nearly 1 in 10 buyer households spend at least half their after-tax income on housing. These households are at serious risk of financial difficulties, especially if family or economic circumstances were to change. Renters are the most prominent group (23 per cent) using the 30/40 rule and therefore the group where social costs are likely to be greatest. It is single persons and single parent households at greatest risk of living in housing stress. On the other hand, couples with children and couples without children barely rate a mention in the two more serious categories of stress. Arguably, couple with children households may be more disadvantaged than suggested as the income measure does not always take into account family size.

A breakdown of housing stress in Australia in 2011 is provided in Table 2. It shows that Sydney is the most stressed city on all measures used, with 9.4 per cent of Sydney households paying more than 50 per cent in housing costs, and 11 per cent of lower  income Sydney households paying more than 30 per cent. Tasmania and South Australia are the least housing stressed states. Of non-capital city areas, Queensland has the most housing stressed households. This may be related to the high demand for housing in the sea change areas of the Gold Coast and the Sunshine Coast where incomes of retirees may be quite low and with the mining boom in inner regional areas. 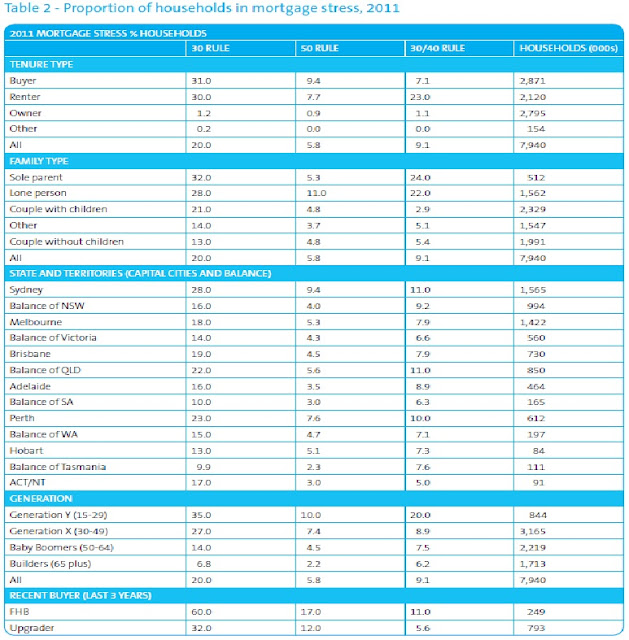 Generationally, it is the young who experience the most housing stress. Stress levels decline with age and we find that those over 65 years of age face very little housing stress. A concerning result is that First Home Buyers (FHBs) have by far the greatest stress of any group. Sixty per cent of FHB households pay more than 30 per cent of their after-tax income on housing. Seventeen per cent spend more than 50 per cent and 11 per cent fall into the 30/40 rule. This is the group that has been hit the hardest by the recent escalation in house prices. They have been forced to buy into a red hot housing market and crystallised the housing gains of the older generation.

The mortgages used by FHBs escalated over the past 10 years.

The typical FHB is also getting older. Larger mortgage requirements and a generation that’s delaying the responsibilities of life drives this ageing of FHB.  The age of FHBs is creeping up, in 2001, 39 per cent of FHBs were under 30 compared with 37 per cent in 2011. The property price boom of the last decade is transferring wealth from the younger generation to the older generation. Whether that wealth is one day returned to younger generations through larger inheritances remains to be seen.


International comparisons
Australia has one of the least affordable housing markets in the world. The 2011 International Housing Affordability Survey conducted in Australia, Canada, Ireland, Hong Kong, New Zealand, the United Kingdom and the United States showed that Australia was the second most expensive of these countries.

While not directly comparable with the results in this report, the survey showed that only Hong Kong was more unaffordable (Kotkin, 2011). That said, there are considerable difficulties in interpreting international house prices. The sort of housing available in each country differs tremendously. Some countries, like Australia and Hong Kong, are highly urbanised. Typically, urban areas are more expensive owing to greater job opportunities and a general preference for city life. Housing quality also varies greatly between countries, for example, in Australia, most housing has a large floor area and is detached while many other countries have much smaller housing that is either semi-detached (terraces/townhouses) or units. Regardless of the difficulties of international comparisons, housing in Australia is expensive compared with most other countries. 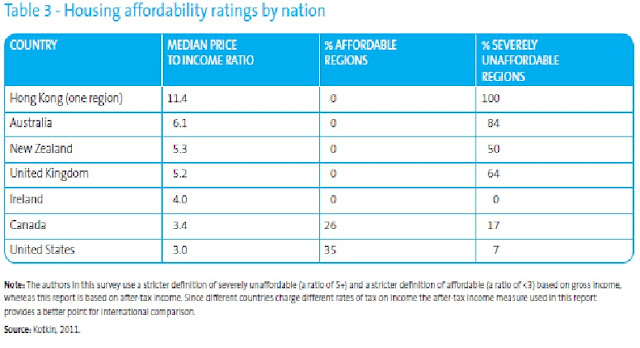 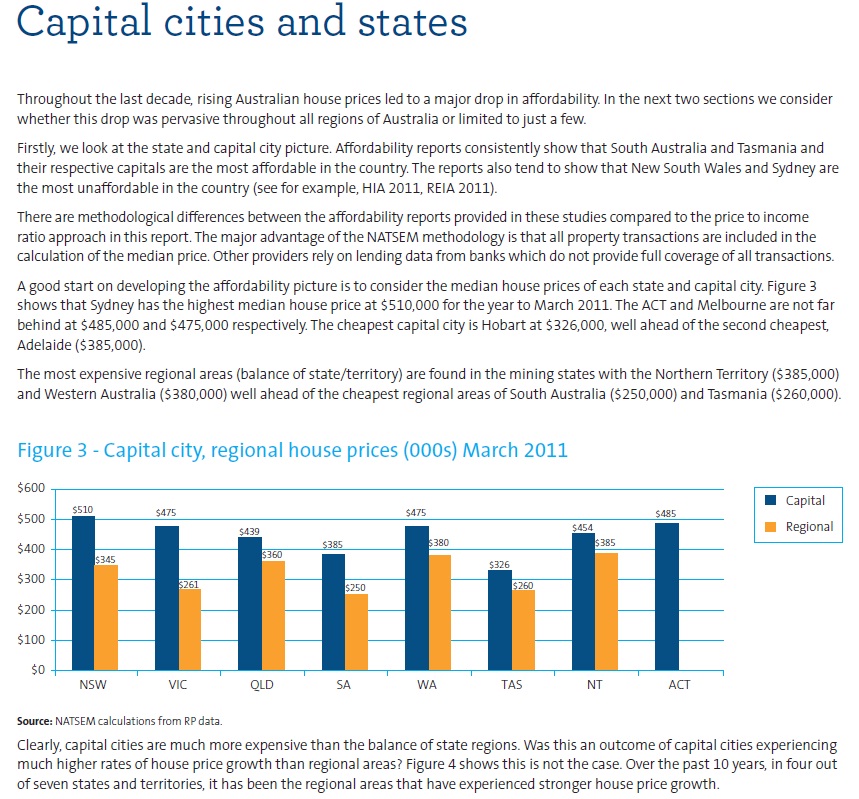 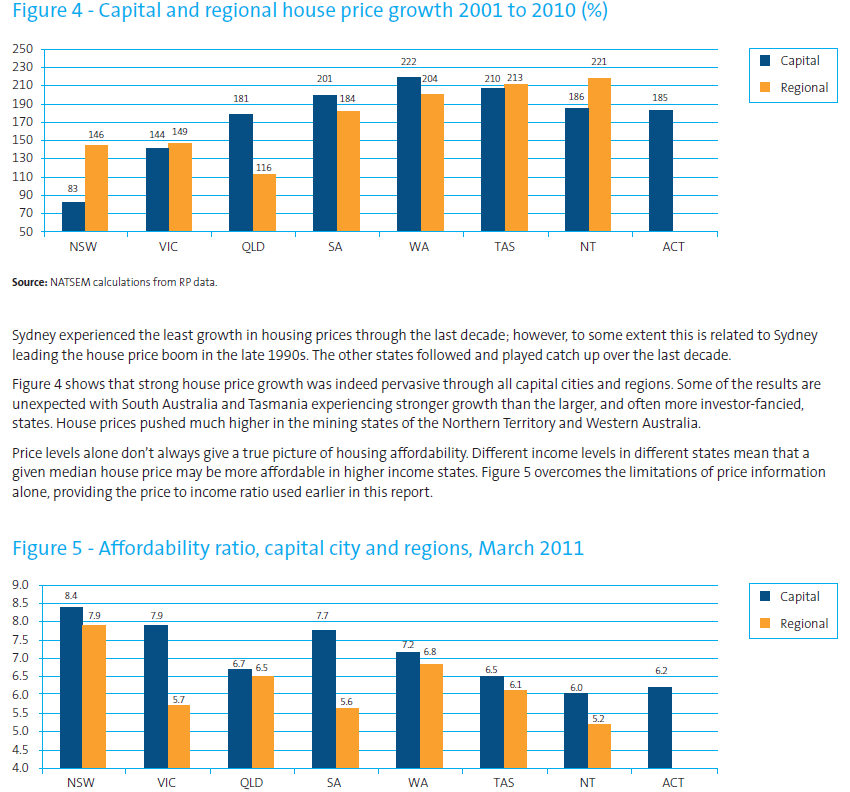 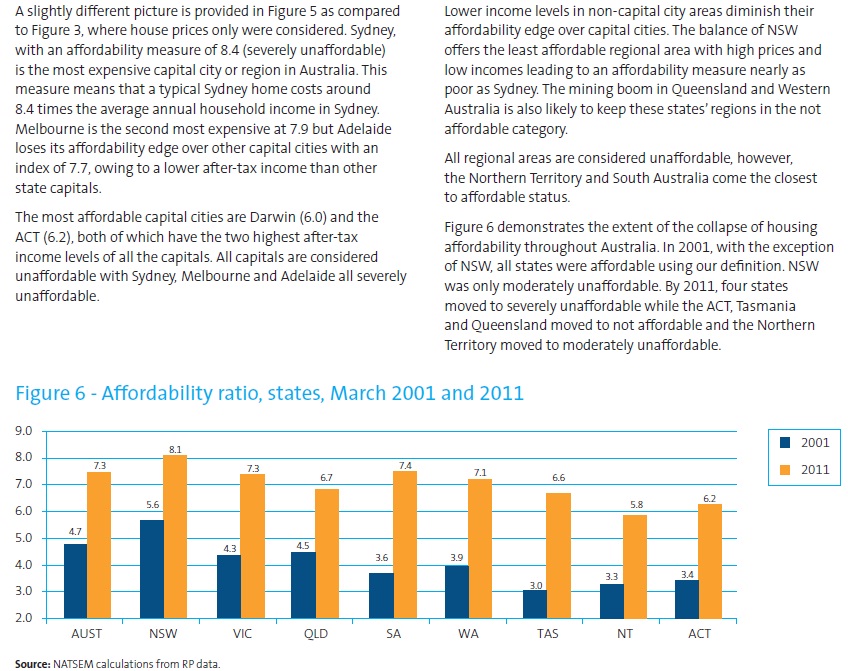 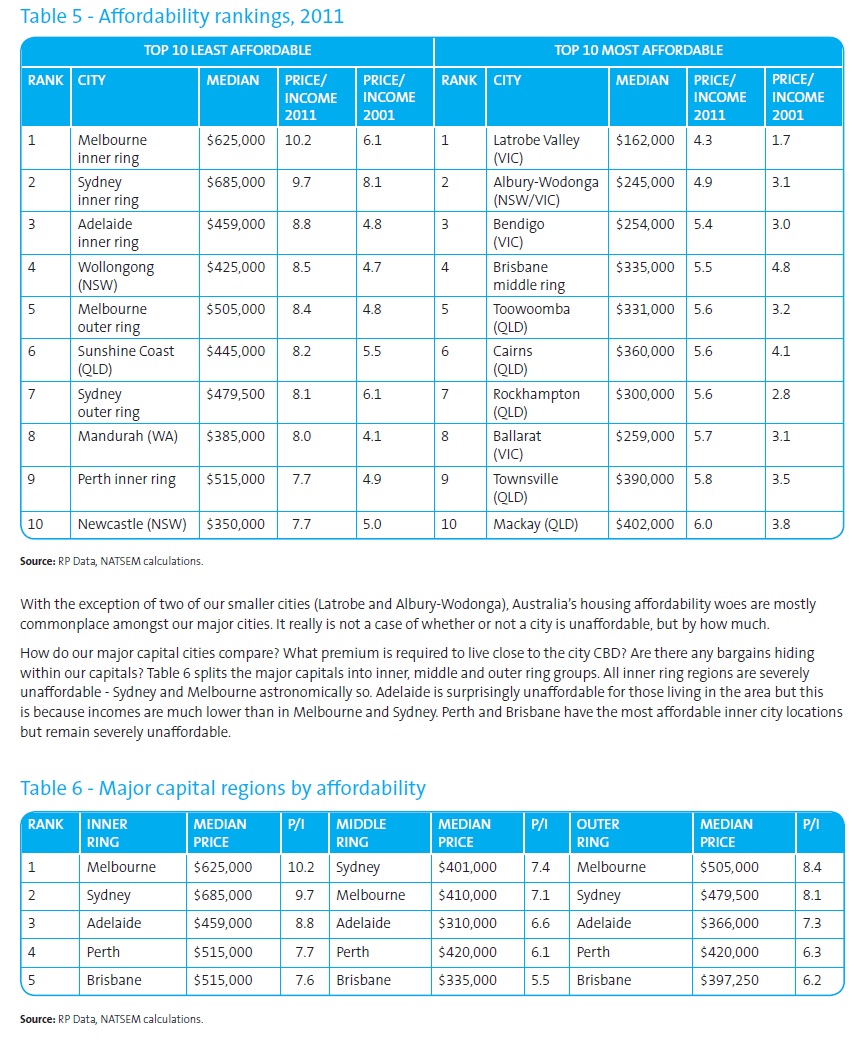 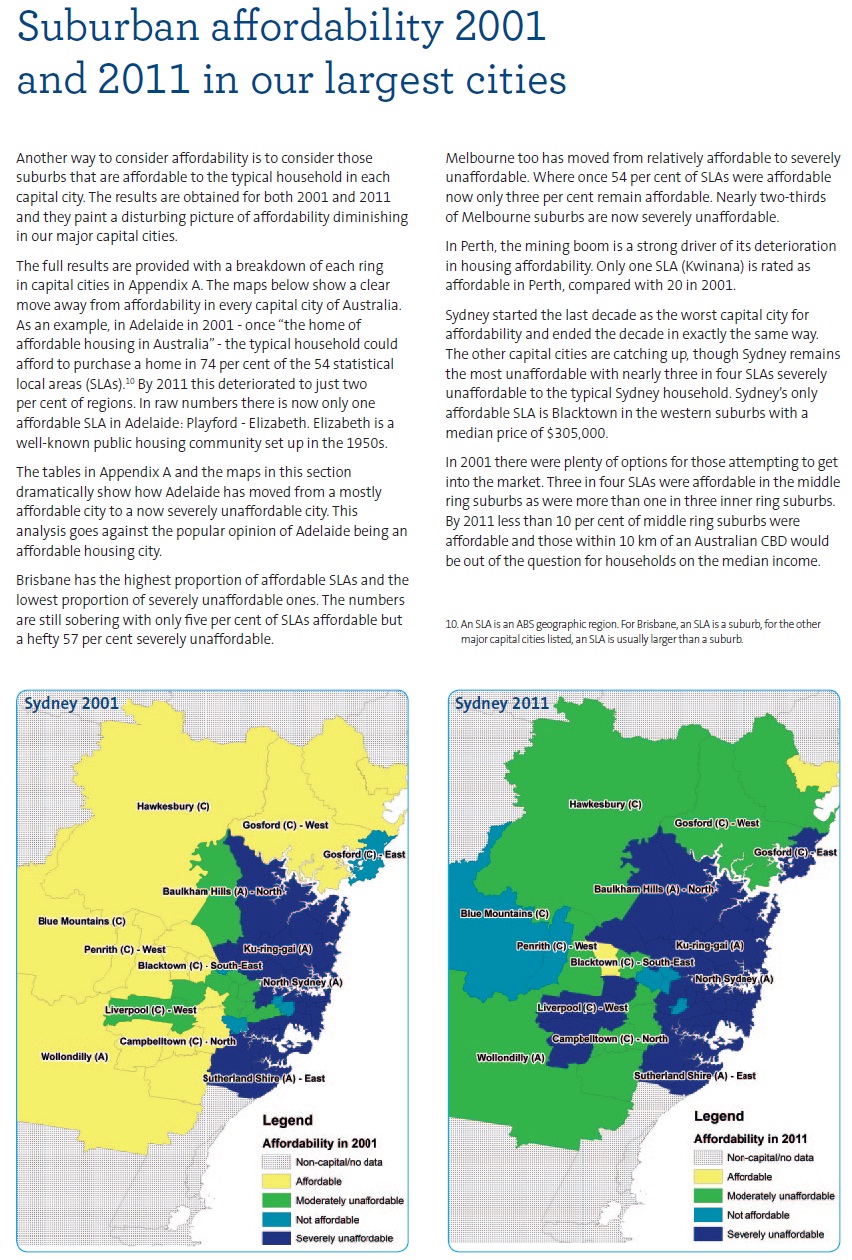 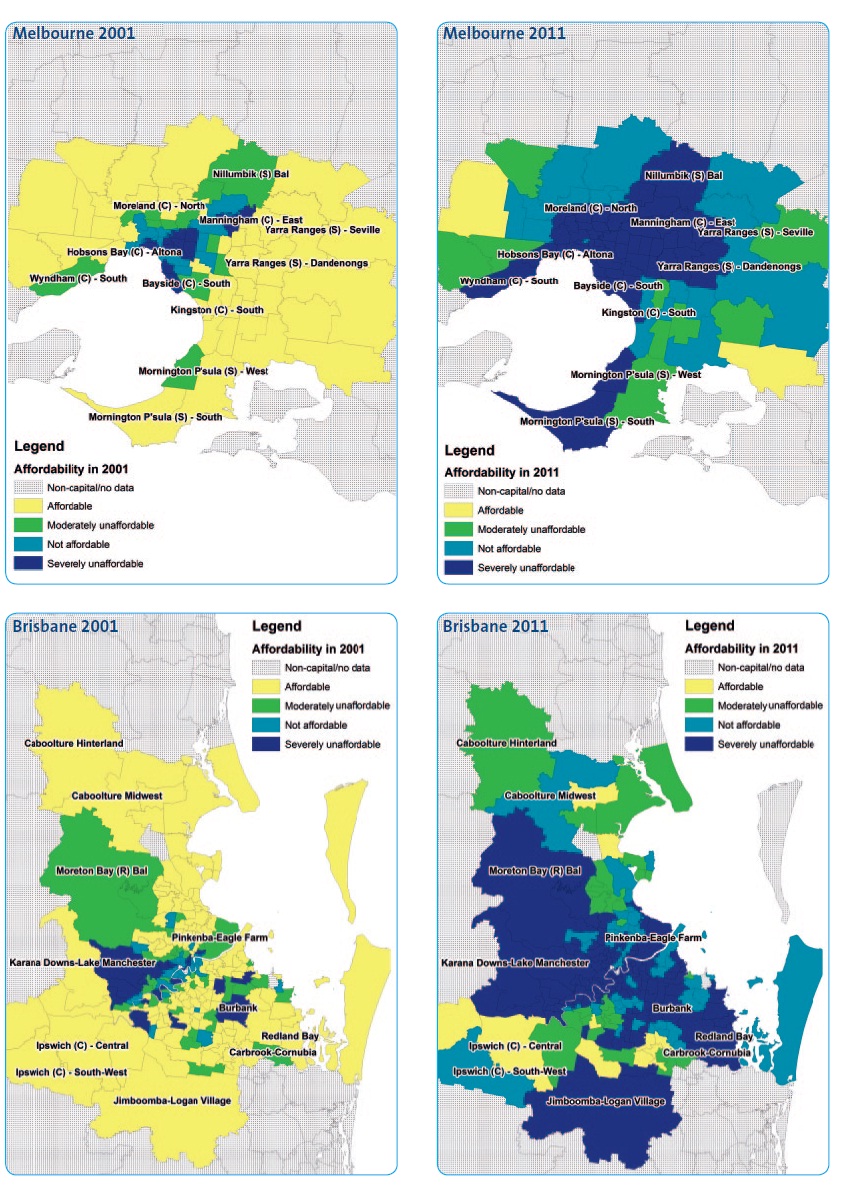 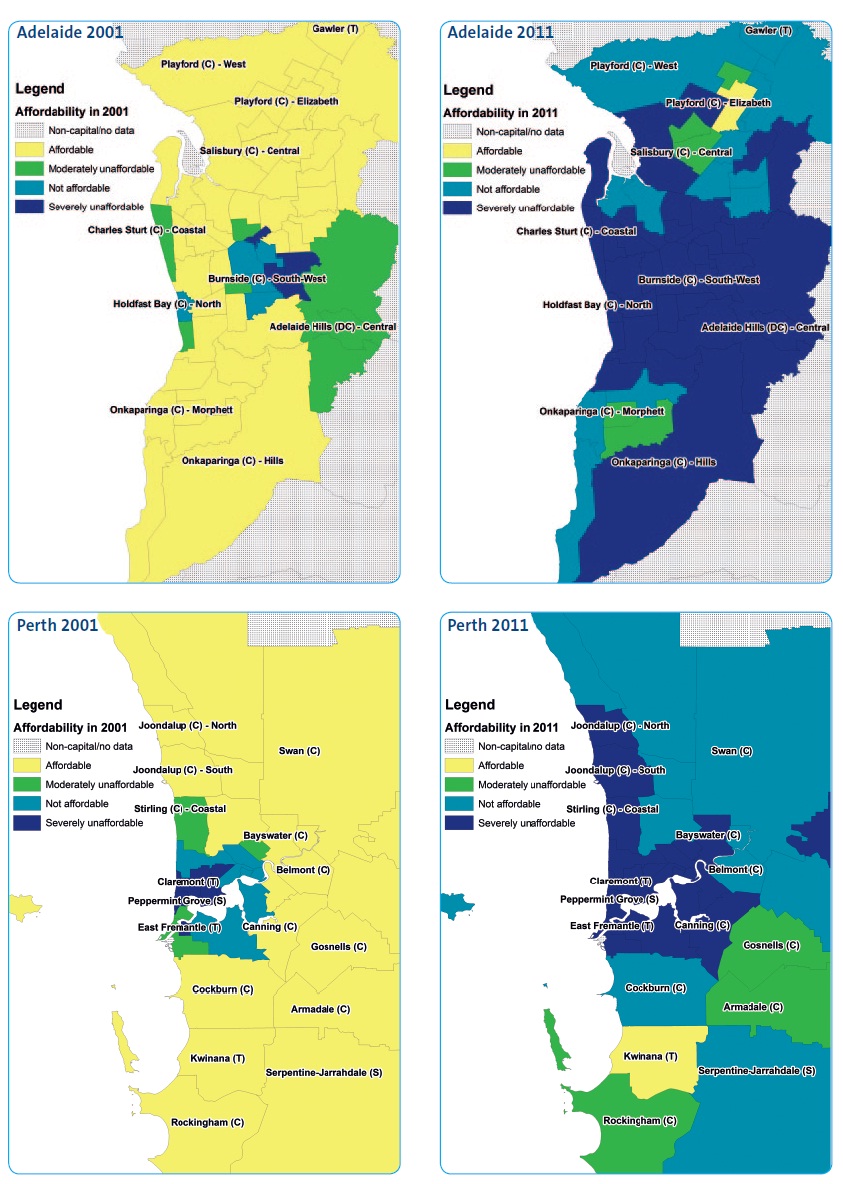 Australia now has amongst the most expensive property in the developed world. This report shows that this decline in affordability is all pervasive through Australia’s states and territories and major cities and towns.

If incomes continue to grow at the same rate as the past 10 years, it would take nearly 10 years of flat house prices for Australia to return to an affordable housing market.

In 2001, more than half the suburbs in our five major capital cities were rated as affordable. Today, only four per cent are affordable. Not a single inner city suburb is affordable. The impact of affordability is most strongly felt by those attempting to get into the housing market via the purchase of a home.

In summary, Australian house prices are simply so high that for many Australians the great Australian dream is just that - a dream. For those who do manage to purchase a house, high house prices mean taking on very high levels of debt that will constrain their lifestyle for many years into the future. Significant, widespread house price drops appear unlikely in Australia, meaning that housing will remain unaffordable for many years to come.

Source: AMP Housing Report
Posted by Not The Greater Fool at 7:19 AM