See article below published in the Australian 2nd May 2012

"We have the house we can't afford"

Is this what is sustaining the Perth property market?
Mum & Dad investors struggling to hold on to their investment property.
Unsuccessfully attempting  to sell  as they struggle with mortgage payments & CPI increases.
Fingers crossed interest rate cuts will offer some relief or salvation.

If ever anyone needs a sign that now is the time to get out surely this couple is it.

Don't think they are unique there are thousands of investors just like them desperate to offload dud property investments unable to find a "Greater Fool:" to offload it on to.

Just don't be the fool to catch that falling knife.

Waking at 4am & getting home & 6pm "Living the Ozzie Dream"

Struggling to pay electricity bills & buy kids clothing, this couple are about to get this years Property Insurance ,Shire & Water rates for 2 properties which will amount to around $8,000. Where are they going to find this?

Forced to return to work "Early" after the birth of their second child just to make the mortgage payments.
Yet they show they have their heads in the sand by saying "I wouldn't say we are living week - week"

Now when you read the article below keep in mind this couple has a $480,000 mortgage against their Tapping Property.

In the Lord's street in Tapping a number of houses have sold recently so we can get a gauge of values in their street. Note I have only selected the 4 x 2 homes on same size block etc to make a fair comparison.

#7 Tried to sell for six months but was taken off the market after they could not get $445,000 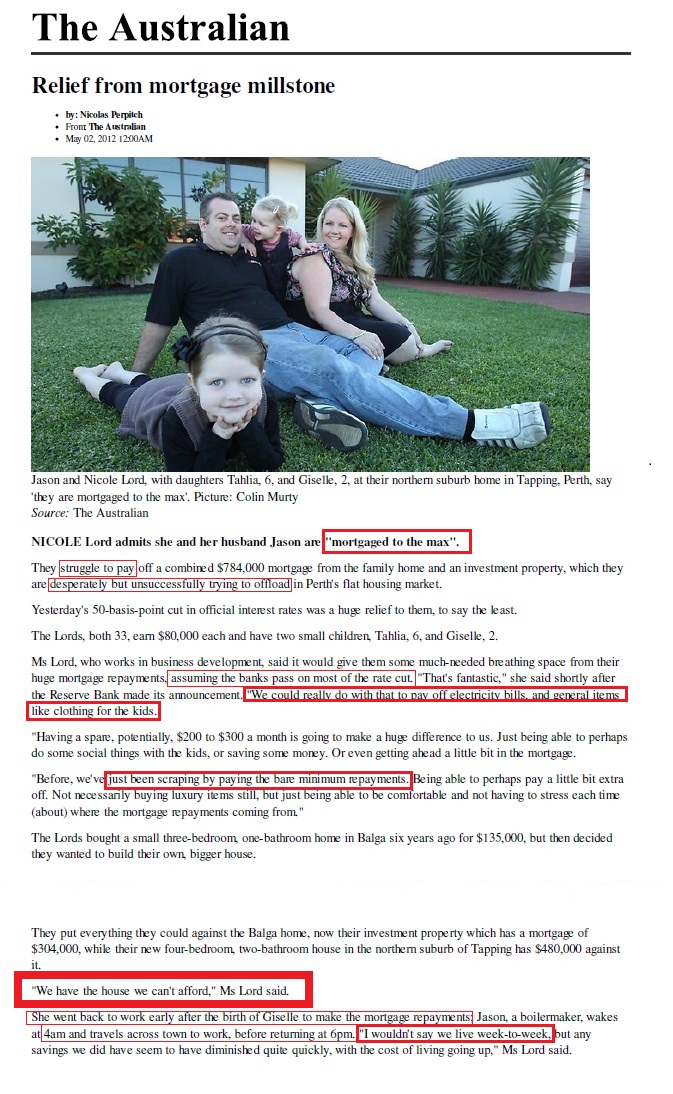 Posted by Not The Greater Fool at 3:29 PM